Have you ever heard someone say “I’m just a mom” or “she’s just a mom?”

What about “oh, he just stays at home with the kids”?

When we reference someone’s (or our own) primary role as a parent, do you wonder: why are we using the word JUST?

The word “JUST” waters down a word or idea in a dismissive way. When we use the word “just” to describe a role or activity, we diminish the importance or difficulty of it.

And this matters because the language we use influences our perceptions. So how we talk about ourselves, for example as “just moms”, can really affect how we see ourselves + then move through life in that role thereafter.

In this post, we’re taking a closer look at how we talk about stay-at-home (or work-from-home) parents + why we — as a society — need to place more importance on parenting roles.

Our Self-Perception Influences Others’ Perception of Us

Why is it that moms are referred to as “superheroes” but still perceived as “just” moms?

Why is it that 9-to-5 working out of the home dads are celebrated for “babysitting” but when a man is the primary child caregiver, he’s “just” a stay-at-home dad?

Knowing how much work goes into running a household + taking care of kids (among other responsibilities), why do we still talk about parenthood like it’s not the impressive + impactful role that it really is?

What is so simplified + dulled-down about motherhood that justifies its being preceded by the word “just”? Let’s really consider this for a moment.

Think about the kind of language we use to describe parenting roles, because how we introduce ourselves + carry ourselves — especially as parent entrepreneurs — matters.

We’re teaching people how to treat us by how we treat ourselves + others.

And yes, at first glance, “just” is a tiny, insignificant word that implies that whatever you’re talking about is, well, tiny + insignificant.

The little addition reads pretty harmless, but it’s not.

What the Word “Just” Actually Signifies

When you think about it, “just” is a word that minimizes whatever follows.

So when we’re saying “oh, I’m just a mom” or “oh, he just stays home with the kids” what we’re really actually doing is making the idea more palatable by keeping it small in some way or excusing it away.

Maybe it’s with an air of sympathy:

Oh, she’s just a mom (what a pity she’s leaving her college degree on the shelf).

Maybe its with an air of jealousy:

Oh, he’s just a dad (I’m putting it down because I really wish I could be that, too).

There are a million angles, but all of them use the word “just” as a way of making the “mom” + “dad” title easier to handle or less of an inconvenience to whoever you’re talking to. Basically, it’s another word for “sorry.”

Think about other times you use the word “just”…

Using “just” in any conversation demeans what you have to say by watering down or softening the message.

“Just” makes it sound like whatever you’re saying next needs to be apologized for. Well, it doesn’t.

You don’t need to apologize for being a mom.

You get to stay at home with your kids? That’s freaking AWESOME.

You get to be damn proud of having quite possibly the biggest role promotion of your life.

You don’t need to apologize for someone else being a dad or a mom either. Maybe they want exactly that + nothing more because parenthood is already everything to them.

Maybe they do other work that they’re “just” not sharing with you.

Maybe they, like Courtney, love having their academic accolades collect dust on the shelf.

Courtney has done a near 180° flip on all that she was taught in college. This doesn’t mean she’s not well-educated or smart because she doesn’t apply that same information in the same way to that once-intended career now.

Courtney still did the work then. She’s just as — if not more — capable now in motherhood.

But what we do know for sure is that when we all start proclaiming the fact that parenthood deserves its standalone, confident, unexcused title by saying “I am a mom” or “he is home with his children full-time” — without the just — everyone is taken more seriously + everyone feels more empowered.

The Value + Impact of Parenting

Saying we’re “just” a parent (or just anything) makes us seem meek.

We know that parenthood is the most involved, intense work we’ll ever do. No parents are meek.

Let’s validate the impressive importance that parenting plays in a world that is hurting right now.

Make parenthood something we don’t need to feel “sorry” for, because it’s actually a sorry world without a deep appreciation + respect for it.

Allow yourself to feel confident about your parenting title.

Let’s all speak well over the people who are parenting as the primary caregivers. Trust in the importance of that title + you’ll inspire others to take that role more seriously, too.

By collectively recognizing the value of parenting, we change the world into a more supportive one that keeps organic family-building at the center for our kids + their kids + all of the generations to come.

And that’s the name of the game, isn’t it?

Now, we’d love to hear from you: do you find yourself using “just” often?

Do you think you might start using “just” less in your everyday conversations?

Write a comment below to continue the conversation with us + other like-minded entrepreneurial parents. We’d love to connect with you here! 💌 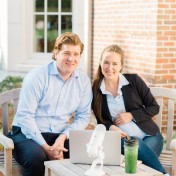 How to Use Bath Time as a Sleep Cue What Being the CEO of My Pregnancy Did for My Motherhood You Are More Prepared Than You Think or mimosas 🥂 ... sign up below + receive simple strategies + tools you can implement in your family-centered business today.